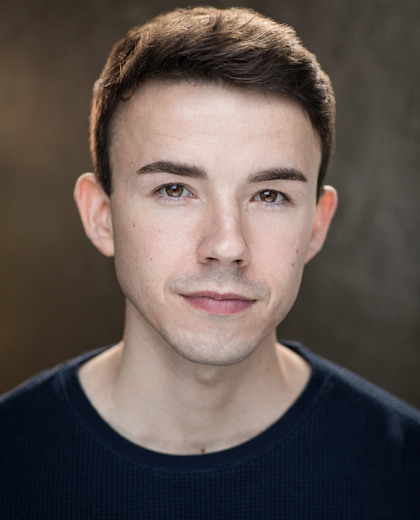 David grew up in Southend on Sea and attended CPA Studios 3 Year Acting Course on a full scholarship. In his 3rd year of training, David was selected as a finalist for the “Stephen Sondheim Student Performer of The Year”.

On stage, David was part of the original cast of Gary Barlow and Tim Firth’s THE GIRLS and has been involved in various rehearsed readings and development workshops on new productions, to include the leading role in GULLIVER’S TRAVELS and an upcoming play based on Lionel Bart’s life, written by Chris Bond. David recently made his West End debut in DEAR EVAN HANSEN at the Noel Coward Theatre directed by Michael Greif, covering (and performing as) Evan Hansen. He also covered the roles of Jared and Connor.

During the pandemic, David created his own one-man-show and performed in venues across London as theatres re-opened.

He was most recently seen playing the lead role of ‘Christopher’ in the National Theatre’s tour of THE CURIOUS INCIDENT OF THE DOG IN THE NIGHTTIME directed by Marianne Elliott.

Theatre Credits Include Rock Of Ages West End, Axe The Musical , West End Heroes 2013 Dominion Theatre , Night of1000 Stars Seasons of Love and BBC Proms ; Sondheim at 80 all at The Royal Albert Hall