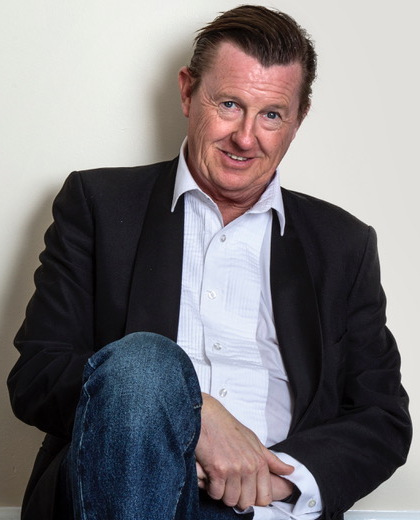 Kevin trained at Manchester Polytechnic’s School of Theatre. His professional debut was at the Greenwich Theatre in 1982.

In 2019 Kevin had a special guest role in ‘Mrs Brown’s Boys Christmas Special’. He completed the UK tour of ‘Rock Of Ages’ 2018/2019 and was Baron Hardup in Cinderella (Cambridge Arts Theatre) 2019/2020. At the end of 2020, he played Detective Banks in the recent Billy Zane film ‘Rupture’. He most recently reprised the role of ‘Pop’ in We Will Rock You (RCCL).

Television work includes:  The Last Company Car, Keep On Running, Blue Murder, Doctors and Holby City. Kevin is probably best known for his portrayal of “sex symbol” Curly Watts, in Coronation Street from 1983 to 2003.  He also has written and presented two series of his own show, Kevin’s Spanish Capers.

Kevin has enjoyed a successful music career, starting as the bass player with the now legendary Smiths, later going on to form his own band, Bunch Of Thieves. After being signed by Simon Cowell to BMG Records, he went on to lead a successful tour of New Zealand with the gold- selling album Present Kennedy.  Kevin is currently signed to Warner Brothers.