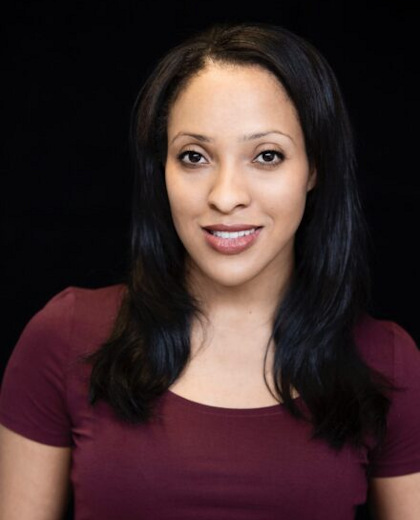 Jenny Fitzpatrick best known for her West End performance in Tina: The Tina Turner Musical at the Aldwych Theatre, as Tina Turner.

She first appeared in the West End as Ronette in 2007 in Little Shop of Horrors. The production began at the Menier Chocolate Factory in 2006 and then transferred to the Duke of York’s Theatre.  In 2008, Fitzpatrick played Billie in the UK tour of “Our House“, directed by Matthew Warchus. She also played Angie in the musical’s 10 year anniversary concert at the Savoy Theatre.  In 2008–2009 Fitzpatrick appeared as the Rose Seller in the revival of the musical Oliver! at the Theatre Royal, Drury Lane.  Fitzpatrick originated the role of Louise in Ghost the musical (2011) beginning at Manchester Opera House and moving on to London’s Piccadilly Theatre.  In 2013 she played the lead role of Tina Turner in the musical Soul Sister in the UK tour. Then starred in the musical Sister Act as Deloris Van Cartier at Aberystwyth Arts Centre.  Fitzpatrick began working with the company Complicité in 2014 performing in a workshop for the stage adaptation of Pink Floyd‘s The Wall, directed by Simon McBurney. In 2016 Fitzpatrick returned to the West End, playing Dr Lacey in the National Theatre and Complicite’s, A Pacifist’s Guide to the War on Cancer, by Bryony Kimmings.  In the 2017 UK tour of Thoroughly Modern Millie Fitzpatrick played the role of Muzzy Van Hossmere and later that year went on to play Lucius in the stage adaptation of Boudica, by Tristan Bernays at Shakespeare’s Globe in London.