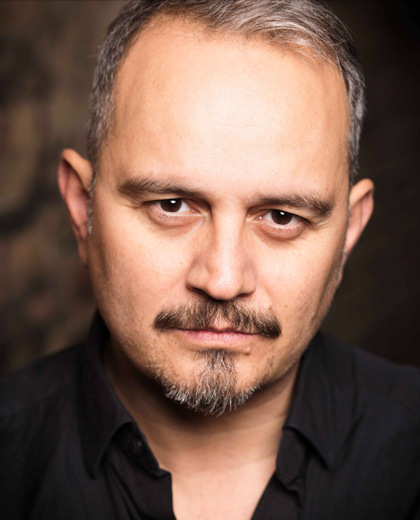 Vas trained at the Guildford School of Acting and is also a Guildhall LGSMD and is represented by Shepperd Fox.

Repertory theatre credits include: the Dentist in Little Shop of Horrors (Millfield Theatre); Schmule in A Kid for Two Farthings (Bridewell); Danny Zuko in Grease (Derby Playhouse); Conway Turl in Leave Him to Heaven (Arts Theatre, Belfast) and Harry Papadopolous, (Papadopolous and sons, Studio, The Other Palace).

Television credits include: Georgie The Fish, In Cradle to Grave with Peter Kay, Tony Cattani in the EastEnders special, Ashes to Ashes. Rob Williams in Family Affairs, Rob Kennedy in Casualty, Danny Irwin in The Bill, Ricky Forsyth in Doctors and a sitcom pilot for the BBC called, Then.

Film credits include: the lead role of Arif Orek in The Road to Ithica for Underground Films; Martin in Second Nature for Timber Street Productions; George in Grandmother’s Hands for Channel
4 Films and Professor Haroun in, The Ark.

Vas has also played pantomime villains, appeared in multiple adverts, and presented many events. He is also the author of the fantasy/fiction, Mythvolution series of novels and wrote the show, On The Box for Carnival Cruise lines. He has directed, the Tempest, The Usual Suspects and, It’s a Wonderful Life, The live Radio Play, for the London Fringe.